You may be itching to get out in the garden this month, but have you been wondering what to plant… 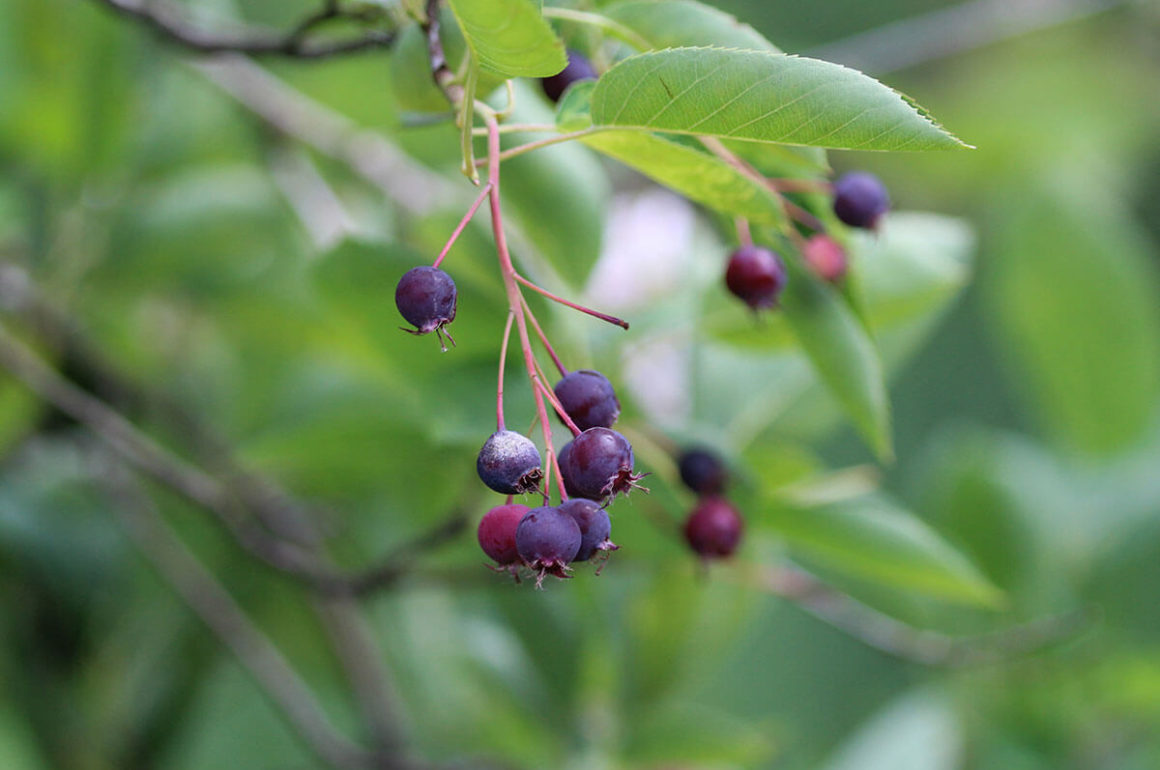 You may be itching to get out in the garden this month, but have you been wondering what to plant in March? Follow our expert guide…

Flower of the month – Magnolia stellata 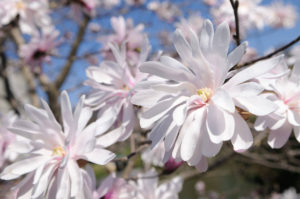 As we flip our calendars over to March, there’s a sense of anticipation in the air that’s on par with the excitement of Christmas Eve. Wherever you look, there are signs of life in the garden. Daffodils, the ultimate harbinger of spring, are out in abundance, even if the ground’s covered in a dusting of snow. As the month progresses, twiggy stems of forsythia are transformed into glowing waterfalls of cheery yellow flowers. Glance down and you’ll catch sight of the dainty blooms of crocus carpeting the ground in shades of white, purple and yellow, providing an essential source of early nectar for insects.

March is regarded as the start of the gardening season, and even though temperatures can often still plunge below zero, the opportunities to savour springtime blooms are abundant. There is, however, one plant that packs such a punch for flower power that it beats its early-season rivals hands down. The star magnolia, Magnolia stellata, emblazoned with its magnificent, dazzling white, star-shaped flowers, is the ultimate wow factor flower to plant in March. It’s a deciduous specimen shrub that pulls out all the stops to announce that spring has arrived in style!

To ramp up the spectacle, the showy flowers of the star magnolia – which are borne from silky buds and can open to 10cm wide – may occasionally be lightly flushed with pink. The dazzling blooms open well before fresh foliage unfurls, smothering bare stems in a sea of white. The fragrance isn’t overpowering; it’s more of a light, gentle scent – a taster of the delights that are more commonly associated with the warmer months, when the perfume of summer blooms starts to fill the air. While some early spring flowers can be at risk from late frosts, the blooms of Magnolia stellata are more resistant to damage than magnolia varieties that bear goblet-shaped flowers, but frost pockets must be avoided at all costs.

The good news is that you don’t have to own a sizeable garden to enjoy the mass of brilliant white flowers that are reliably borne on this iconic springtime wonder as the days start to grow longer. The star magnolia is a slow-grower, reaching just two or three metres high and unlikely to spread to more than three metres at maturity, while growing it in a container will restrict its size further and create an ideal specimen patio shrub for gardeners who don’t have enough room in borders.

Magnolia stellata is hardy, so there’s no need to worry about its ability to overwinter, but plants don’t care for exposed sites, so always grow in a location that’s sheltered from cold, drying winds. The protection of a wall or fence can work wonders at providing an extra layer of reassurance if you live in a colder region of the UK. A sunny or part-sunny position is a must, as is well-drained, moisture-retentive soil. Magnolias generally dislike dry soils, so incorporating well-rotted organic matter at planting time is advisable if you garden on light soil. Plants will need to be kept well-watered while they establish, especially during hot summers. There’s no need for formal pruning: simply remove any damaged, crossing or diseased branches in midsummer. Follow these tips and you’ll have a glorious shrub or small tree that’s the envy of the neighbourhood every spring.

Vegetable of the month – Broad beans 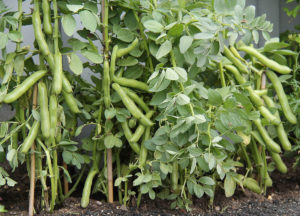 Broad beans are the perfect vegetable to plant in March. Eating freshly picked broad beans is one of the ultimate joys of growing your own. The flavour of supermarket broad beans is never on the same level as the succulent contents of home-grown pods. Spring-sown broad beans are easy to grow and make an excellent crop for those who are new to kitchen gardening.

Broad beans grow best in full sun in a sheltered position, preferring to get their roots down into rich, well-drained soil. Digging and improving the soil by adding garden compost or well-rotted manure before sowing will pay dividends, as will warming the soil prior to sowing.

For an early-maturing crop with exceptional flavour, broad bean varieties don’t come more highly recommended than ‘De Monica’, a proven variety for disease-resistance that can be directly sown outdoors from March onwards. If space is at a premium, opt for ‘The Sutton’ which forms bushier, more compact plants while the beans are a distinctive creamy green colour. Another tried-and-tested variety for heavy crops is ‘Imperial Green Longpod’ – its pods can be up to 38cm (15in) long, each containing up to nine large green beans. Or for something really different, sow ‘Red Epicure’, a novelty variety that yields excellently flavoured, attractive crimson beans.

Sow seeds around 5cm deep, with rows 22-24cm apart (check the packet for exact spacings of your chosen variety) and support plants using canes and string. Keeping plants well-watered, especially when they begin to flower, is essential, as is carefully hoeing to remove weeds from between rows that will otherwise compete for moisture and nutrients.

One of the most common problems that you’re likely to face during the growing season is blackfly, with these pesky aphids often forming around the tops of plants. They’re partial to the tender tips of broad beans, so pinching out the tips once the lowest truss of flowers has set small pods can help to reduce infestations and encourage more pods.

Tree of the month – Amelanchier lamarckii 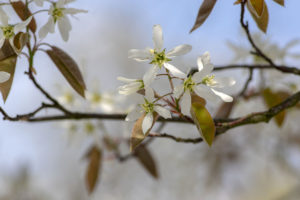 Looking for a small tree that’s perfect where space is at a premium, and offers interest throughout the year? Commonly known as snowy mespilus or Juneberry, Amelanchier lamarckii flowers reliably early in the season, with its finest hour in March as heads of delicate star-shaped white flowers burst forth.

Young foliage emerges tinged with bronze, but its real party trick gets under way in autumn as leaves turn fiery shades of orange and red before falling as the nights draw in. Don’t overlook the dark-red/purple berries in June: these treats are loved by birds, which will rapidly descend to make the most of nature’s feast.

With so many tricks up its sleeve, it’s no wonder that the snowy mespilus has a reputation as a tree for all seasons, and holds a Royal Horticultural Society Award of Garden Merit (AGM) for top garden performance. Plant it as a specimen tree in full sun or partial shade, in well-drained neutral or acidic soil (avoid chalky soils though) and it’ll grow to no higher than six to 10 metres after 20 or so years.

With plenty of bulbs, flowers, vegetables and trees to plant in March, we’re interested in what you’ll be planting this month! Let us know in the comments! 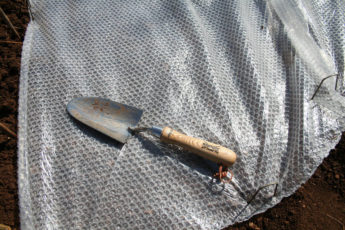 How to Warm Your Soil Ready For Spring Seed Sowing 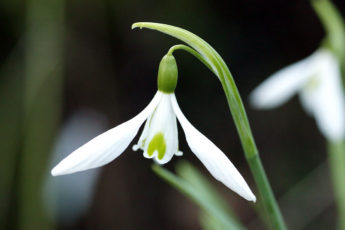 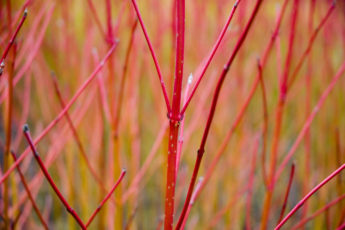