If climate change scientists are correct, UK gardeners will have to learn to cope with more frequent weather extremes in… 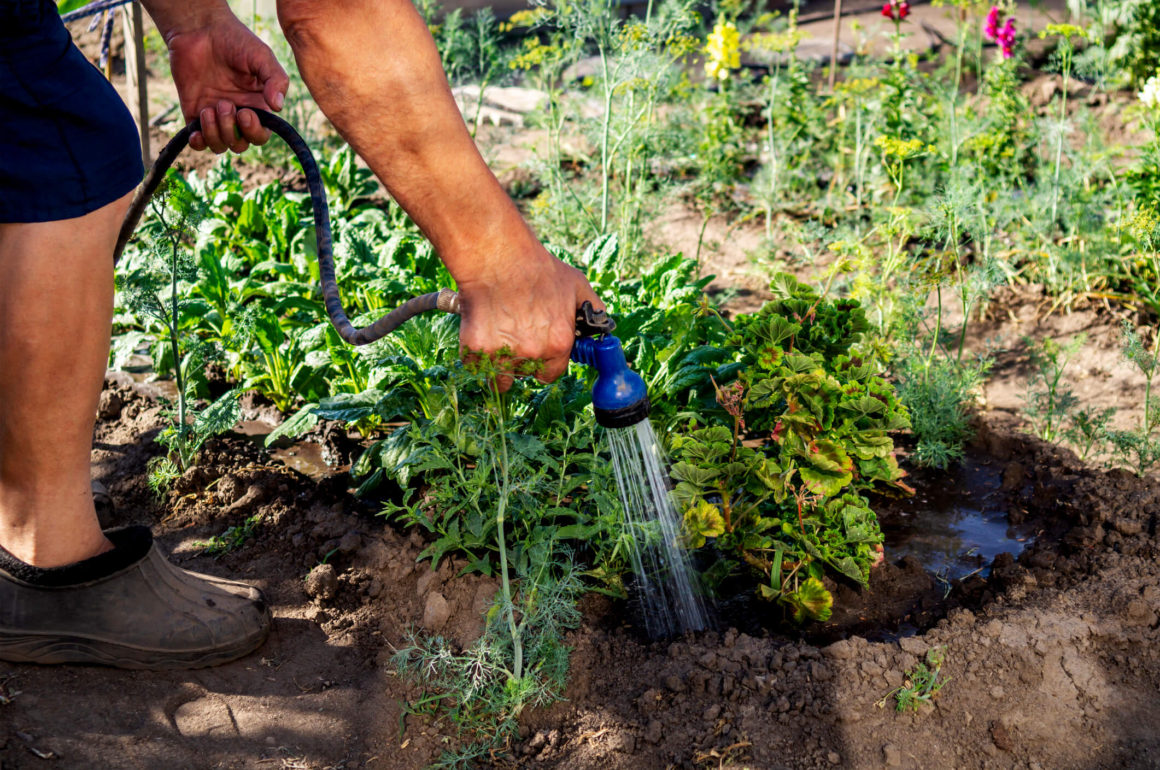 If climate change scientists are correct, UK gardeners will have to learn to cope with more frequent weather extremes in future. The scorching summer of 2018, for example, was the joint hottest for the UK, along with 2006, 2003, and the infamous drought of 1976. In fact, climate change made 2018’s heatwave around 30 times more likely than it would have been under normal conditions, according to the Met Office.

If you’re reading this and saying “but it often rains all summer in Britain,” you’d be right. A Royal Horticultural Society report, Gardening in a Changing Climate, predicted “more frequent and intense rainfall events, in combination with rising temperatures”.

The key to gardens surviving in an increasingly unpredictable climate is to create a water-efficient garden by harvesting rainwater when a deluge comes, watering your garden wisely when the mercury rises and choosing plants that tolerate dry spells.

Here’s our guide to creating a water-efficient garden that’ll stand a better chance of thriving when rain stays away.

Learn the art of ‘smart watering’

We’ve all done it – grabbed the hose and given the garden a good soaking. But drenching entire borders is a waste of water and an expensive mistake if you’re on a metered supply.

Effective watering needs to be carried out first thing in the morning or just before dusk, when temperatures are lower and plants can absorb moisture before it evaporates. Watering in the heat of the day risks foliage being scorched by strong sunlight.

There’s also no need to flood the whole border. Aim the stream directly at the base of the plant, allow it to soak into the soil, then repeat. Unless the weather is boiling, don’t be tempted to water borders every day, as plants will become lazy and won’t bother putting roots deep into the soil to seek out underground moisture reserves.

To avoid watering becoming a chore, lay soaker hose – pipe that contains thousands of tiny holes – around thirsty plants and crops. Turn the tap on once or twice a day, for a short period, and water will be delivered exactly where it’s needed. If you’re going away, invest in a timer to switch the outdoor supply to the soaker hose on and off – there are even mobile phone apps that allow you to operate your watering from anywhere in the world!

Remember that only new lawns need to be watered in warm weather. Established grass may turn yellow during dry spells, but usually recovers when autumn rain arrives. It’s also better to raise the lawnmower’s blades, as cutting grass too short leaves it more vulnerable to drought.

Water butts are a wise investment 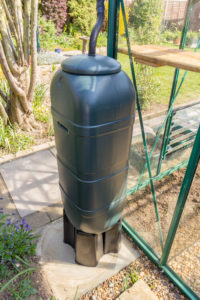 Size matters when it comes to water butts: buy the biggest capacity butts that your garden can accommodate. The largest usually hold 220 to 250 litres of water, and you’ll be amazed how quickly they fill when the heavens open – and how fast they run dry when you’re watering daily.

It’s worth attaching a butt to every downpipe on your house, using rainwater diverter kits, which are sold by DIY stores and are simple to fit. If you have space, kits are available that allow numerous butts to be linked together, creating a fantastic rainwater reserve.

It’s also worth installing guttering on your shed, greenhouse and garage, and attaching a water butt to each. If space is tight, choose a slimline water butt that will hold around 100 litres.

Not only will rainwater harvesting slash your bill if you’re on a water meter, but it will help your garden to survive if the UK is hit by hosepipe bans during future droughts. Topping-up garden ponds with rainwater from butts is recommended, as chlorinated tap water can upset the natural balance of water.

If summers become hotter, hanging baskets and container plants will be vulnerable, as they dry out quickly. Filling with specialist ‘pot and basket compost’ helps, as it contains a wetting agent that prevents rapid drying out. For gardeners using standard compost, mix in water-retaining gel that’ll capture moisture when watered and gradually release it to roots.

Before filling a hanging basket with compost, a great trick is to sit a deep plastic saucer in the base. Not only will it capture run-off, but the saucer acts as a reservoir for plant roots. Stand patio containers in big saucers so that any run-off is contained and can be taken-up by the compost as it starts to dry out.

10 of the best drought-beating plants

Another way to make sure your garden survives when water is scarce is to plant wisely. Check out our list of the 10 best plants for surviving the heat! 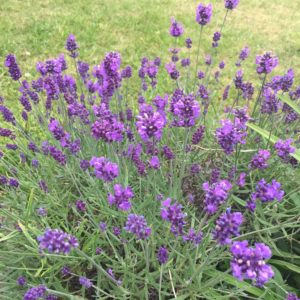 One plant that’s guaranteed to perform during hot, dry summers is lavender. Its blue or violet flower spikes are a magnet for bees and plants thrive in sun-soaked spots, as long as soil is well drained. Young plants will need to be watered until they’re established.

The purple-flowered rock rose isn’t fazed by drought. In fact, it’s at its best in poor, dry soils. It’ll flower profusely all summer, as long as it’s grown in a sheltered, sunny position. A great choice that rarely needs watering and thrives on neglect.

Another lover of poor, well-drained soils in full sun, perovskia is a must for drought-resistant borders where its showy panicles of violet-blue flowers, held above aromatic foliage, provide real wow factor in late summer and autumn.

The ice plant comes into its own in late summer, with flat heads of pink flowers carrying on into November and providing a late source of nectar for bees. Grow in sunny, well-drained borders.

Better known as sea holly, eryngium will happily put down roots in poor, dry soil – as long as it gets plenty of sunlight and drainage is good. Thistle-like architectural flowers are an intense shade of blue.

The Mexican feather grass adds a prairie-style touch to planting, especially in gravel gardens, where its feathery foliage sways gracefully in the wind. This deciduous grass will thank you for fertile soil and full sun.

There’s no easier way to create a spectacular mass of showy flowers that’ll bloom all summer and into autumn. Cosmos is at its best during warm, dry summers – but plants need regular dead-heading to keep the show going.

Its name may be a mouthful, but the plant commonly known as spurge is a must for any drought-beating herbaceous border. Erect, weighty, yellowy-green flower heads are a spring spectacle and it looks at home in Mediterranean style gravel gardens, too. 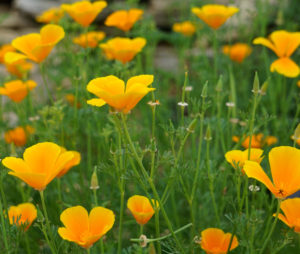 If you have an exposed sun-baked border where little will grow, or need to create a drought-resistant container, try the California poppy. Available in shades of red, orange and yellow, flowers will open and bask in direct sunlight.

The Chusan palm basks in hot, dry summers and shrugs off winter chills, tolerating temperatures as low as -10 to -15C. Whether planted in a sunny border or grown in a large container, there’s no better way to bring a touch of the Med to your back yard.

What other ways do you save water in your garden? Do you have any plants that still put on a show even when the heat is on? Let us know in the comments. 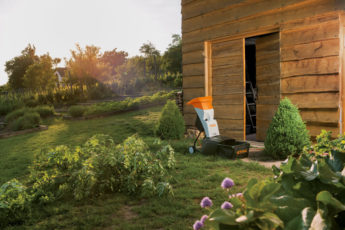 The benefits of using a garden shredder 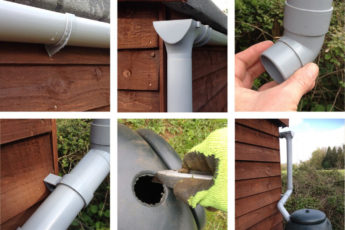 How to put up shed guttering 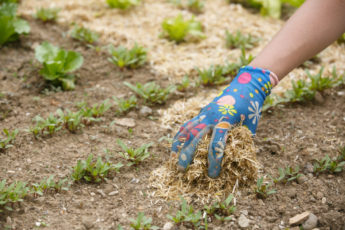 How to protect your flower beds with mulch