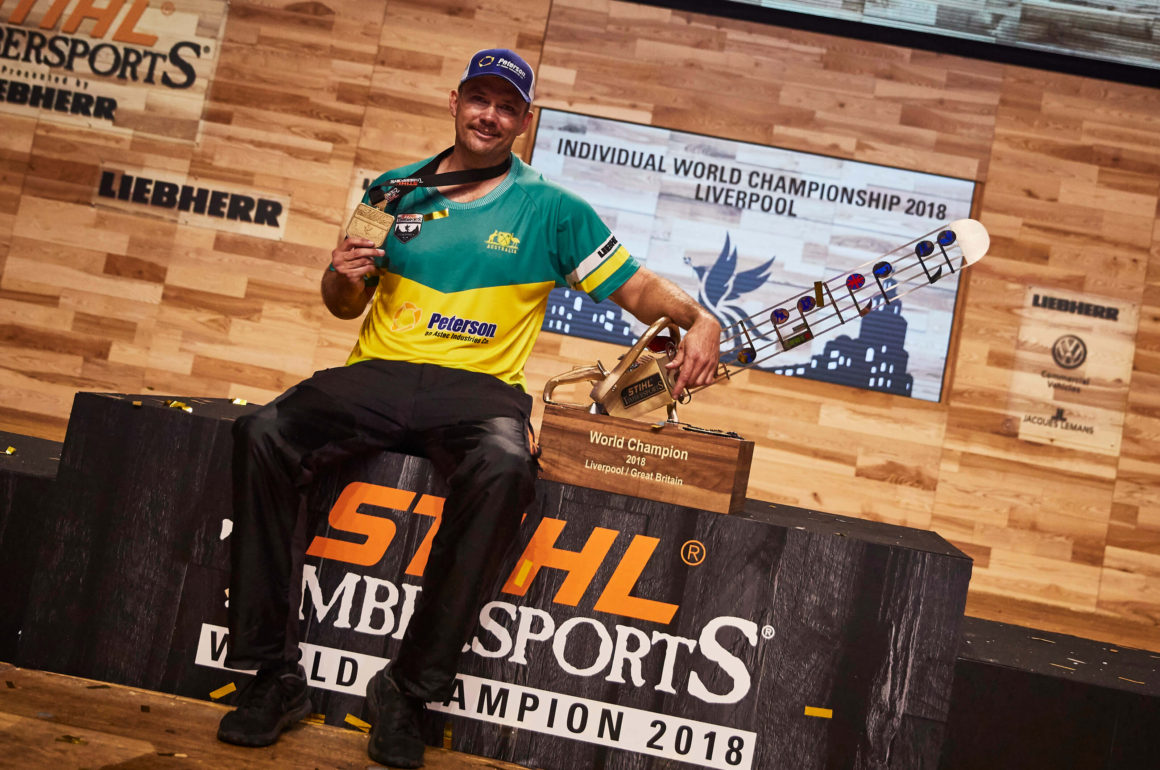 The TIMBERSPORTS® World Championship was held in Great Britain for the first time ever on Friday 19th and Saturday 20th October, when the best logger sports competitors from around the world came to Liverpool to find out just how much the Liverpudlians love live sport!

The Team World Championship took place on Friday 19th October, when the team from Australia, the Chopperoos, reclaimed their title in an action-packed night. But there wasn’t much time to celebrate their victory as Aussie team member, Laurence O’Toole, was representing the land Down Under in the original extreme sport on Saturday 20th October.

National champions from 12 countries competed in the Echo Arena in front of a passionate crowd of global fans, with the goal of securing enough points to be crowned the TIMBERSPORTS® World Champion. 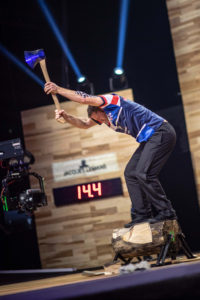 British champion, Elgan Pugh, was up first competing against Martin Komarek in the Underhand Chop. Komarek, from the Czech Republic, finished 5th in the 2017 Championship and was the highest-placed European so Pugh had his work cut out for him, but he pulled out a personal best time of 22.36 seconds, narrowly beating Komarek, to the elation of the audience. “When I won the Underhand against Martin, the place erupted with people cheering and shouting,” said Elgan, “It was unbelievable how good the support was.” 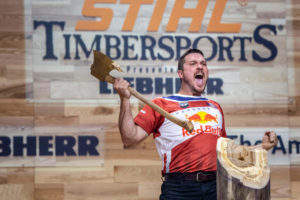 The second round was the Stock Saw event, Pugh scored well, coming fourth overall. This run of form continued into the Standing Block event in the third round, when he achieved another personal best time of 20.38 seconds, however, the other competitors had also found the extra performance they needed; in total, 23 personal best times were set during the evening, including 12 new National Records and a spectacular World Record from Matt Cogar in the Standing Block Chop. Cogar chopped through his log in just 11.03 seconds, knocking over a second off the previous World Record that had been held by TIMBERSPORTS® legend, Jason Wynyard, since 2007 and was elated with the time!

Unfortunately for Elgan Pugh, his admirable effort wasn’t quite enough to get him through to the final three rounds. Pugh, along with Paolo Vicenzi from Italy, Pontus Skye from Sweden and Koen Martens from Belgium were eliminated, with the remaining eight athletes taking on the Single Buck and the Springboard in the next two rounds.

With nine-time World Champion Jason Wynyard carrying an injury, it was clear that the fight for the World Championship was wide open, and O’Toole, Komarek and Cogar took full advantage, taking first, second and third place in both the Single Buck and the Springboard event. O’Toole was on fire, scoring maximum points and setting a new National Record in the Springboard with an astonishing time of 39.44 seconds.

The last event in the Individual World Championship is the Hot Saw, a huge chainsaw weighing up to 30 kg, with up to 62 horsepower. Only the top 6 athletes get the chance to take on the Hot Saw, so Christophe Geissler from Switzerland and Arkadiusz Drozdek from Poland were the unlucky ones missing out on the final round.

With Cogar, Wynyard, Komarek, O’Toole, Cumberland and Robert Ebner from Germany all to compete, the stage was set. At this point, the top five were separated by just 12 points, with up to 18 points to play for in the final event and the audience could feel the tension. 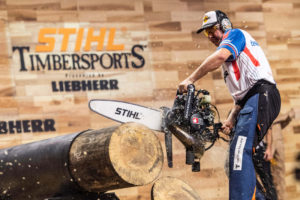 Using the Hot Saw takes immense control and it is notorious for causing an upset in competitions, due to the risk of disqualification, something that Komarek knows about only too well. In 2017, his chain came off the saw mid-cut meaning he couldn’t finish the event within the two minute time limit, leaving him with no points in the final round. But Komarek was taking no risks this year, using a slightly different shaped bar on his saw to minimise the risk.

In the end, all of the athletes were cool under pressure and managed to score points. With just O’Toole left to go, Matt Cogar was on top of the leaderboard, waiting nervously on stage to see if his rival would survive the spotlight. O’Toole needed to deliver a time under 6.81 secondsto be sure of the top spotand deliver he did, getting a time of just 5.79 seconds and securing his first ever World Championship title. With personal bests in every single discipline on the night, O’Toole’s performance deserved the gold medal. Cogar and Komarek, who received the silver and bronze medals, showed the great sportsmanship of TIMBERSPORTS® in celebrating with O’Toole on the podium.

Want to find out more? You can see all of the times for each discipline on the official TIMBERSPORTS® database.

Who were you supporting in the Individual World Championship? What was your favourite TIMBERSPORTS® moment of the weekend? Let us know in the comments. 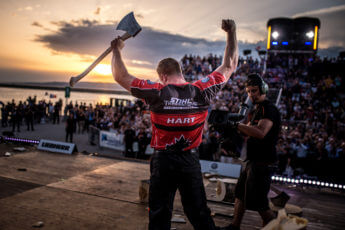 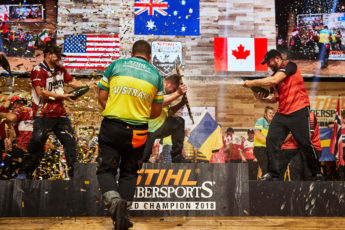