The British TIMBERSPORTS®Championship delivered another thrilling competition on Saturday 3rdAugust, but Elgan Pugh proved too strong for the competition when… 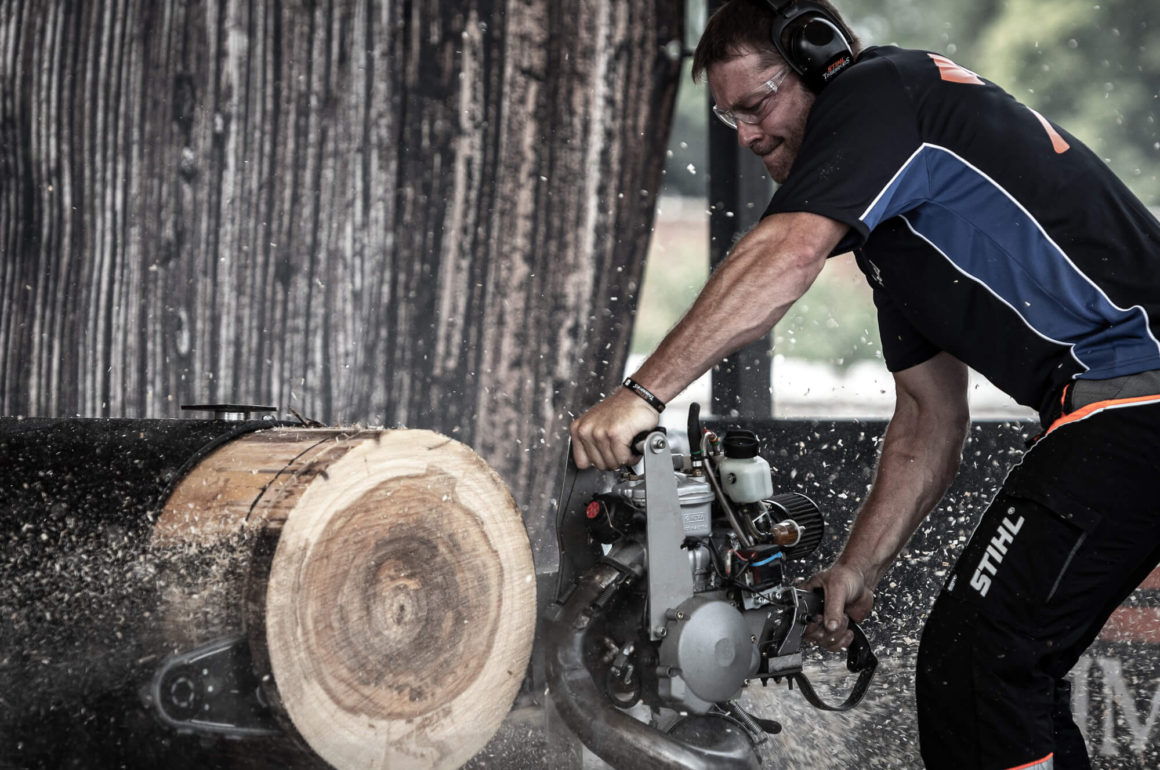 The British TIMBERSPORTS®Championship delivered another thrilling competition on Saturday 3rdAugust, but Elgan Pugh proved too strong for the competition when he put in a five-star performance to win his fifth British Championship.

With a change to the competition format this year and the return of 2014 champion, Rob Chatley, it was hard to predict just who would come out on top. Team GB member Glen Penlington was also eyeing up the podium, after visiting New Zealand over winter to take part in several logger sports competitions, whilst Johnny Lewis, who finished 6th in 2018, had also recorded some impressive results in other chopping events this season. 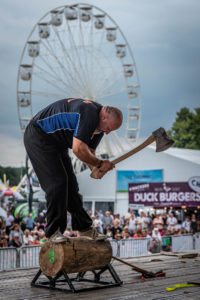 In a departure from previous years, the first event of the Championship was the Underhand Chop, where competitors stand on top of a 32cm log, chopping between their feet with a racing axe so sharp you could shave with it. And Pugh set the tone for the rest of the competition when he stormed to the top of the leaderboard by smashing through the log in 25.92 seconds to take the full 12 points available after the first discipline.

Next up was the Stock Saw, where the athletes had to saw two discs or “cookies” from a 40cm log within a width of 10cm, using a standard STIHL MS 661 chainsaw. Those who had underperformed in the Underhand Chop knew this was a perfect chance to claw back points, and Scott Fowkes, the 2016 British Rookie Champion, made the most of this opportunity by setting a time of 11.24 seconds.

The third discipline was the Standing Block Chop and it was here that Chatley made his mark. As the current British record holder, Chatley knows his way around a Standing Block and that experience showed when he scored maximum points with a time of 28.81 seconds.

After three events, the bottom four athletes were knocked out and it was here that Bob Penlington, Matt O’Rourke and Ashley Davies were eliminated. In a shock result, 2018 Team GB member, Dave Thomas, also missed the cut recording times that were some way off his personal bests. 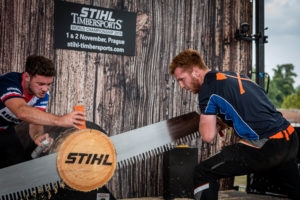 The top eight competitors then took on the Single Buck and the Springboard. The Single Buck takes an impressive amount of stamina to manually saw through a 46cm log with a 2 metre long crosscut saw, and this is where Pugh’s dominance started to show when he set a personal best time of 14.22 seconds. In a round of fast heats, three other athletes set new personal bests as well; Penlington, Fowkes and Ozzie Morris all shaved seconds off their previous times.

The Single Buck did deliver the first disqualification of the competition too – in second place after the first three events, Chatley was hot on the heels of Pugh, but in his bid to put more points on the board, he recorded a false start by a few hundredths of a second, leaving him with no points at all in this round.

The penultimate event was the Springboard, where competitors use two boards to climb a 2.8m “tree” then chop through the block at the top, and again Pugh showed his determination by scoring maximum points and setting another personal best. But with disqualifications for Morris and Bill Huaki, who couldn’t complete it the event in the time limit of 2 minutes 30 seconds, this left just six athletes fighting it out in the final round, the Hot Saw.

Hot Saws are super powered chainsaws weighing in at around 30kg, with chain speeds of up to 240 km/h. In the final discipline, Pugh, Lewis, Penlington, Fowkes, Craig Golder and Chatley all had the task of controlling these mighty saws to cut 3 complete cookies from a width of 15cm marked on a 46cm diameter log. 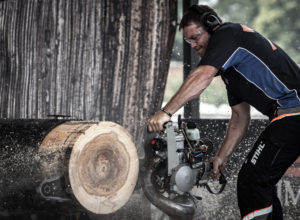 With Pugh 14 points ahead of second placed Penlington, and a maximum of 18 points up for grabs in the final event, the pressure was on for both of them to deliver the cut of their lives in the final head-to-head heat of the competition. And the audience were on the edge of their seats when Penlington failed to get his hot saw started at all in the 60 second warm-up time. Realising he was running out of time, Penlington reset the saw and prepared himself for the starting gun, whilst the crowds waited to see what would happen in the deciding heat.

Pulling the starter cord, the saw roared into life, but a technical issue meant that the saw was pulling at an angle. Pugh was cool under pressure though completing three cuts in a new British record time of just 7.47 seconds and sealing a famous fifth victory in the British Championship! Could Penlington hang on to second place? He waited nervously for the judges’ announcement, but it wasn’t to be – the angled cuts meant that he had cut too much of the log and had crossed the 15cm line, leaving him with a disqualification in the final event and relegating him to third place on the podium.

Penlington’s loss was Johnny Lewis’ gain and he jumped up the leaderboard into second place for his first time on the podium in a British TIMBERSPORTS®Championship, an achievement he was rightly proud of. Pugh was understandably happy with his performance too: “All in all, it was a pretty good day really! It’s a tough competition mentally, but with the possibility of qualifying for the World Championship, there was no holding back – I was just trying to go as hard as possible on every event even on the Hot Saw. I’m very happy about the new Hot Saw record, but it was my own record that I broke so I’ll just try and do it again next year! ”

The British Team who will compete at the World Championship will now be chosen, with the times from the British Championship a key factor to consider when it comes to the selection process.

All competitors will be keeping their fingers crossed that they make the cut. You can watch their best moments from the thrilling competition in our Championship video and let us know who you think will make the team in the comments below.

Before the competition, Spike Milton, Global Sporting Director for TIMBERSPORTS®, explained what is needed to do well in the sport: “To be the best, you’ve got to have good training, technique, ability, desire, but above all dedication to the sport. You’ve got to experience it, live it, breathe it and that’s how you get to the top.”

This advice was certainly passed on to the athletes competing in the British Rookie Championship on Sunday 4thAugust. This competition is just for under 25s, who take part in four of the six TIMBERSPORTS®disciplines: the Stock Saw, the Standing Block Chop, the Single Buck and the Underhand Chop. Competitors earn points depending on the times recorded, and the winner is the athlete with the most points after all disciplines. 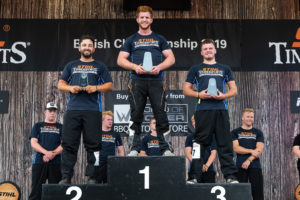 Finn Neusinger, the 21 year old from Tiverton in Devon, took the Rookie title earning maximum points in all but one of the disciplines. But there was a close battle for the remaining podium places with Jordan Muscato from Bere Regis, Dorset reaching 21 points and Tyler Owens and Jon Bowerman tying on 20 points.

Friday 2ndAugust also saw the return of the TIMBERSPORTS®Newcomers’ Challenge, where people who are newer to the sport and aren’t able to compete in all the competition disciplines can take part in individual discipline competitions. Tom Redmond, also from Bere Regis, took home the individual trophy for the Standing Block Chop competition, Joe Groom from Guildford won the Underhand Chop and Ross Hanley from Harrogate took both the Stock Saw and Single Buck titles.

Did you catch any of the action? Let us know your favourite bits in the comments. 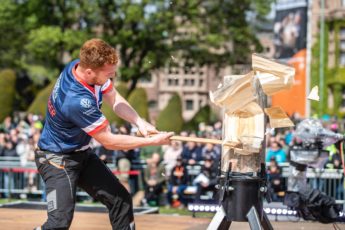 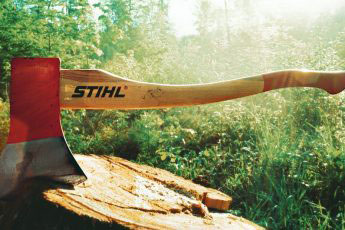 SPIKE MILTON ON AXES – GET THE BASICS RIGHT