After a year away, STIHL TIMBERSPORTS® came back with a bang this weekend with two competitions in one day on… 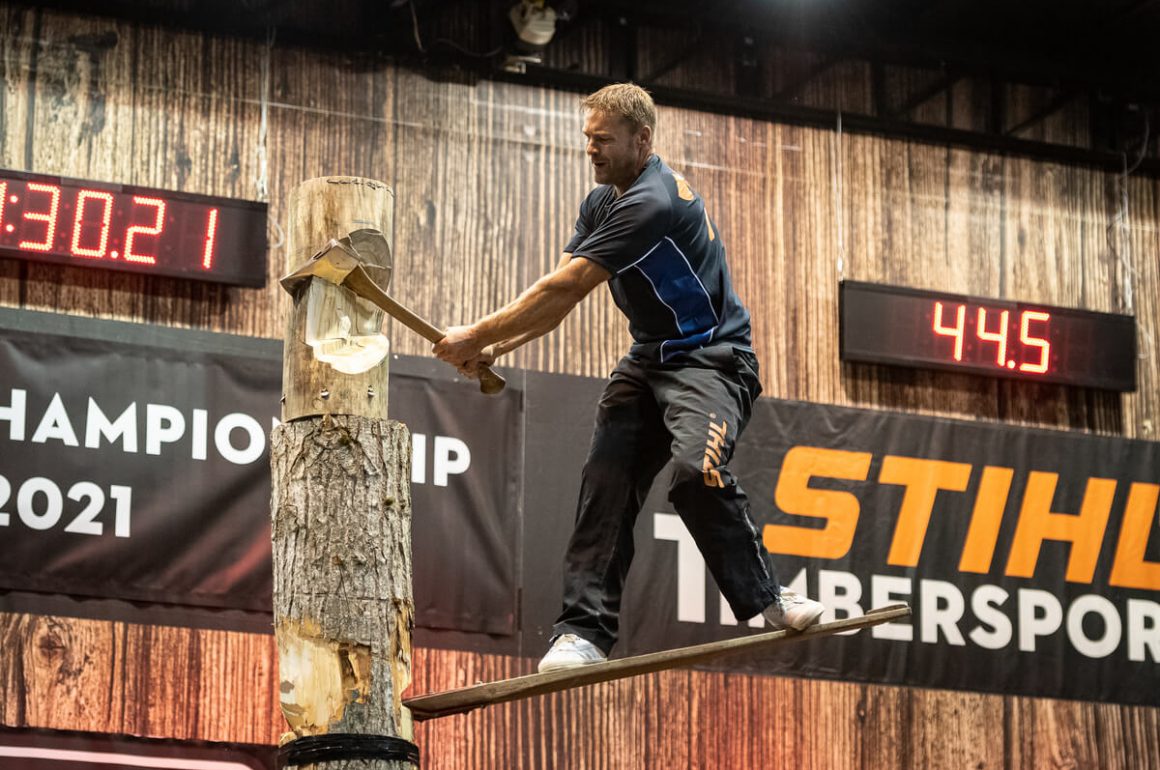 After a year away, STIHL TIMBERSPORTS® came back with a bang this weekend with two competitions in one day on Sunday 5 September at the Telford International Centre.

It all kicked off with the rookie championship at 11am. Rookie competitors must be under 25 at the start of the year to be able to compete as a rookie for that year and they only compete in four of the six disciplines that the pro competitors must master. But those that do well in the rookies can quickly move on to bigger and better things. Just ask Ferry Svan from Sweden – after excelling in rookie STIHL competitions in Sweden, he won the Rookie World Championship in 2017. Only two years later, he represented Sweden at the STIHL TIMBERSPORTS® Pro World Championship at the tender age of 23 achieving an amazing 7th place finish. 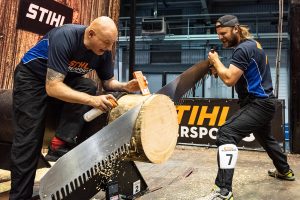 Eight British rookies took to the stage in Telford starting with the Stock Saw discipline in the first round. Using a standard STIHL MS 661 petrol chainsaw the rookies aimed to cut two cookies from a horizontally mounted log in the fastest time. George Spencer took an early lead by completing it in 12.67 seconds, but as a forestry worker who uses the MS 661 chainsaw during his daily work, he made the most of his advantage.

The Standing Block Chop was next with Jordan Muscato achieving the quickest time of just 20.50 seconds to chop through a vertically mounted log with a razor-sharp axe. This was the start of Muscato’s dominance in the competition, who followed up with the fastest times in the Single Buck discipline as well as the Underhand Chop. Spencer remained hot on his heels throughout, as did Jack Morris, a 19 year old from Knighton in Wales, who managed to improve from 6th place in the 2019 TIMBERSPORTS® Championship to 3rd place and a spot on the podium. 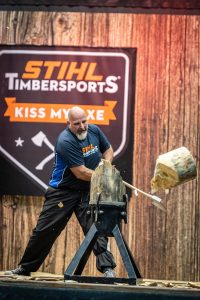 Muscato was really pleased with his win and is already aiming higher. After the competition, he said “I’ve had a really good day, but the aim of the game next year is to try and get into the pro championship.”

You can watch the full livestream of the rookie competition here.

Next up on the Telford stage was the main event, the STIHL TIMBERSPORTS® British Pro Championship. This competition is fiercely fought, but 39-year-old Elgan Pugh from Bala, Wales has looked almost unbeatable in recent years with a 5-year reign as British TIMBERSPORTS® champion. Before the competition though, Pugh admitted that he hadn’t done as much training as in previous years. Would 2021 be the year that another athlete stole his crown?

In the first round, it certainly looked like this might be the case, with Pugh coming in an unexpected 4th in the Underhand Chop. Instead John Lewis, who celebrated his 50th birthday this year chopped through the log in just 24.12 seconds, beating his previous personal best by over 8 seconds. 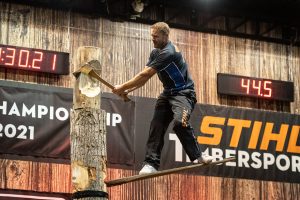 He was followed by Tom Redmond from Dorset who had a time of 29.14 seconds. Redmond was competing in his first Pro TIMBERSPORTS® Championship and, due to a back injury in 2016, was concerned that he might struggle in the Underhand Chop but instead came away with a second place. This impressive performance continued throughout the competition, especially in the Standing Block Chop where Redmond came out on top with the fastest time of 25.57 seconds.

The other competitor to watch was 30-year-old Glen Penlington, also from Knighton, Wales. Prior to the competition, several of the other athletes named Penlington as the favourite to stop Pugh from getting his sixth consecutive TIMBERSPORTS® title. With only 4 points separating the top four after the first three disciplines, the competition was balanced on a knife edge.

The Single Buck is the fourth discipline in a Pro competition and Penlington had clearly been working on his technique in the event, achieving second place with a personal best time of 17.03 seconds. With Pugh taking the top spot in the Single Buck, Penlington still had work to do if he was going to take the overall win.

The next discipline was the Springboard which Penlington holds the British record in – could he pull out another record-breaking performance? Penlington competed in a heat against new pro competitor Tom Redmond, and whilst both finished with respectable times, Pugh still managed to get the quickest time overall. 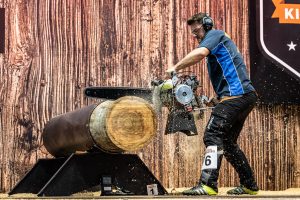 Going into the final round, the Hot Saw discipline, only Redmond and Penlington were still within reach Pugh’s points total. But the Hot Saw isn’t nicknamed the Maker or Breaker for nothing! It was where it all fell apart for Penlington in the last British TIMBERSPORTS® Championship in 2019, when he failed to get his saw started in the 60 second warm-up and a subsequent technical issue meant he ultimately received a disqualification.

In the penultimate heat, Redmond and John Lewis both managed to cut three complete cookies from the log in solid times of 12.13 seconds and 8.61 seconds respectively, leaving both of them with a chance of a spot on the podium depending on the results of the final heat.

Penlington and Pugh took their positions and listened for the 60-second warning from the judges. Pugh warmed up his saw and got into position, but it looked like history was repeating itself for Penlington when it took three attempts to start the saw. With 30 seconds of the warm-up left, the saw spluttered into life and Penlington was ready to go.

On the judge’s call, the two competitors lifted the saws, which is no mean feat in itself with the 27kg Hot Saw. Cutting through the first two cookies, the athletes were almost exactly in time, but Pugh finished the final cut just 0.31 seconds ahead of Penlington, taking the first place in the discipline as well as the overall title.

Despite his disappointment at not beating Pugh, Penlington was still pleased to take the silver medal. He said “I’m pretty pleased with second place, it’s the highest I’ve ever been on the podium, but you’re always coming here for the win. I’m happy to get three cookies on the floor with the Hot Saw though and get a personal best in that.” 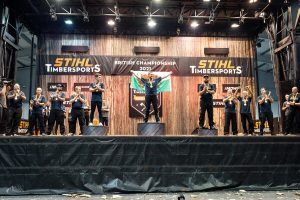 The clear winner though was Elgan Pugh, where his years of experience shone through. His performance got more assured as the competition progressed, recording the quickest times in the last three disciplines, to take his sixth consecutive title. Pugh was still showing the pedigree of a champion in his post competition interview when he admitted that there were still areas he could improve on: “I know I should have been able to do a bit better in a few of the events, but the average of the results was pretty good.”

He won’t be celebrating too much though as both Pugh and Penlington are heading to Aigle, Switzerland for the World Trophy European Qualifier on Sunday 12 September. The top six European athletes will get to compete in the 2022 World Trophy against the best in the world, so they will both be focussing on the next event. You can watch the livestream of the European Qualifier on the Official STIHL TIMBERSPORTS® Series YouTube channel, and watch all of the highlights from the 2021 British Championship here. 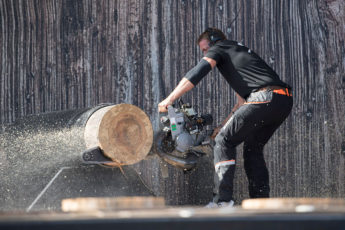 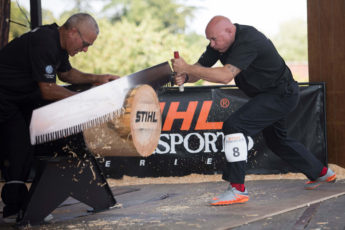 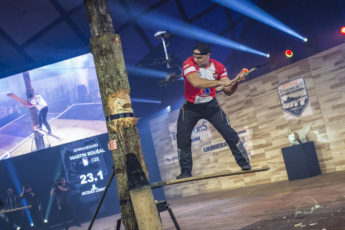