The TIMBERSPORTS® World Championship – Norwegian Wood comes to Liverpool in 2018!

The British team took part in this year’s STIHL TIMBERSPORTS® World Championship this weekend in Lillehammer, Norway, and during the…

The TIMBERSPORTS® World Championship – Norwegian Wood comes to Liverpool in 2018! 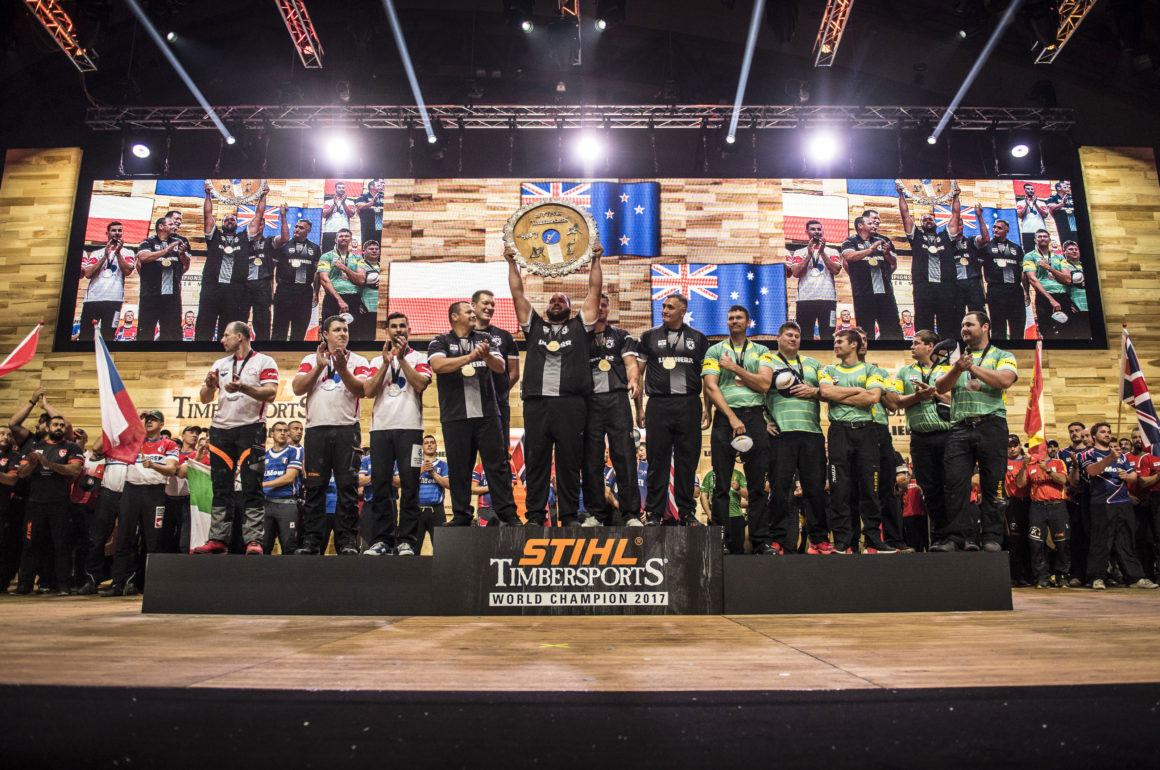 The British team took part in this year’s STIHL TIMBERSPORTS® World Championship this weekend in Lillehammer, Norway, and during the event, it was announced that they will get to compete on home soil in 2018 with next year’s World Championships being held in Liverpool.

The World Championship will take place at the Echo Arena Liverpool on 19 and 20 October 2018. Councillor Malcolm Kennedy, Lord Mayor of Liverpool, made the trip to Norway for the announcement on Saturday. To mark the handover, he was presented with a wooden plaque by Wolfgang Zahn, Head of Development on the STIHL Advisory Board, who talked about Liverpool being the birthplace of the Beatles and referenced their song, Norwegian Wood, to link the current and future host cities! 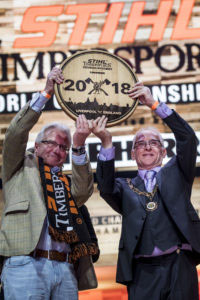 Councillor Malcolm Kennedy is looking forward to seeing how the sport-loving Liverpudlians embrace TIMBERSPORTS® in 2018. He said; “We are delighted to be hosting next year’s Championships at the Echo Arena Liverpool and it is a privilege to showcase a sport that is watched by millions worldwide. I have been here all weekend and the atmosphere at both the team and individual events was electric. It is like nothing I have seen before, and is a fantastic sporting spectacle.”

The team event will take place on 19 October 2018, where teams from around the world will compete against each other in a true knockout system. Four team members will complete the disciplines of Stock Saw, Underhand Chop, Single Buck and Standing Block Chop in a relay against another national team with the fastest team progressing to the next round.

Team GB will be looking to improve on their results from the 2017 Championship when they were knocked out by New Zealand in the round of 16. New Zealand were the eventual winners after beating Poland in the final. Despite coming second, the Polish team were ecstatic, especially as they had to complete the four-leg relay with only three team members. Jack Groenwald took on both the Stock Saw and the Standing Block Chop in each heat after their fourth team member dropped out shortly before the competition.

The defending champions, Australia, were disappointed after an error in the semi-finals added a 15-second penalty to their time, which meant they were 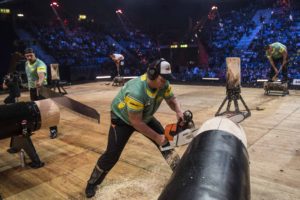 knocked out by Poland. Even with all their experience, Australia demonstrated the unpredictable nature of TIMBERSPORTS® when Brad De Losa jumped the gun on the Single Buck and started before the previous discipline, the Underhand Chop, had been completed.

Aussie athlete, Brayden Meyer, couldn’t hide his disappointment, “We’re certainly not happy about placing third, because we came here to win gold”. Their only consolation was when they achieved the best time of the competition, 47.85 seconds, beating the Canadians in the small final to come third overall. 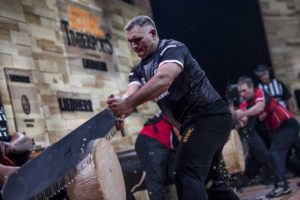 The Australians faced more frustration in the Individual Championship on Saturday. The Australian athlete, Brad De Losa, made a technical error in the final event, the mighty Hot Saw, adding vital seconds to his overall time. TIMBERSPORTS® legend, Jason Wynyard from New Zealand, capitalised on the error cutting three ‘cookies’ from the log in just 7.81 seconds giving him an amazing ninth World Championship title.

Elgan Pugh, from Bala in Wales, had the honour of representing Great Britain in the World Championship after securing first place in the British Championship at BBC Countryfile Live in August 2017. Elgan was rightly proud of his performance in the international competition, securing qualification to the final for the first time and finishing ninth overall. He said, “I was so happy to qualify for the final this year. The competition was tough and I was delighted to finish in 9th place. The news of the world championship coming to Liverpool next year has made me very excited, it would mean a lot for me to be able to compete in our home nation.” 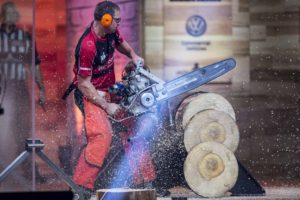 The third spot on the podium was taken by Mitch Hewitt from Canada, who set an unbelievable time in the Springboard, completing it in just 38.66 seconds. But Martin Komarek from the Czech Republic stole the hearts of the crowd when his saw chain came off during the Hot Saw discipline. The Hot Saw event has a time limit of 1 minute so Komarek ran off stage to retrieve the tools to fix his chain in a bid to earn valuable points within the time limit. 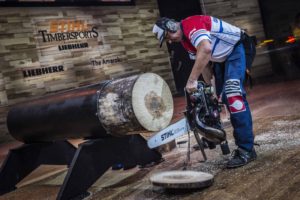 Despite thunderous applause from the supportive spectators, it wasn’t to be. Komarek’s only consolation was that he finished as the best European competitor.

This year’s Championship was full of the thrilling action that will make it an event not to be missed in Liverpool in 2018.

If you want to be part of the action at next year’s Stihl TIMBERSPORTS® World Championship at the Echo Arena in Liverpool, follow us on Facebook or Twitter to hear the latest news about tickets and other TIMBERSPORTS® events.

If you are interested in taking part in TIMBERSPORTS®, STIHL will also have a limited number of places available at a newcomers training camp in 2018. Contact marketing@stihl.co.uk for further information. 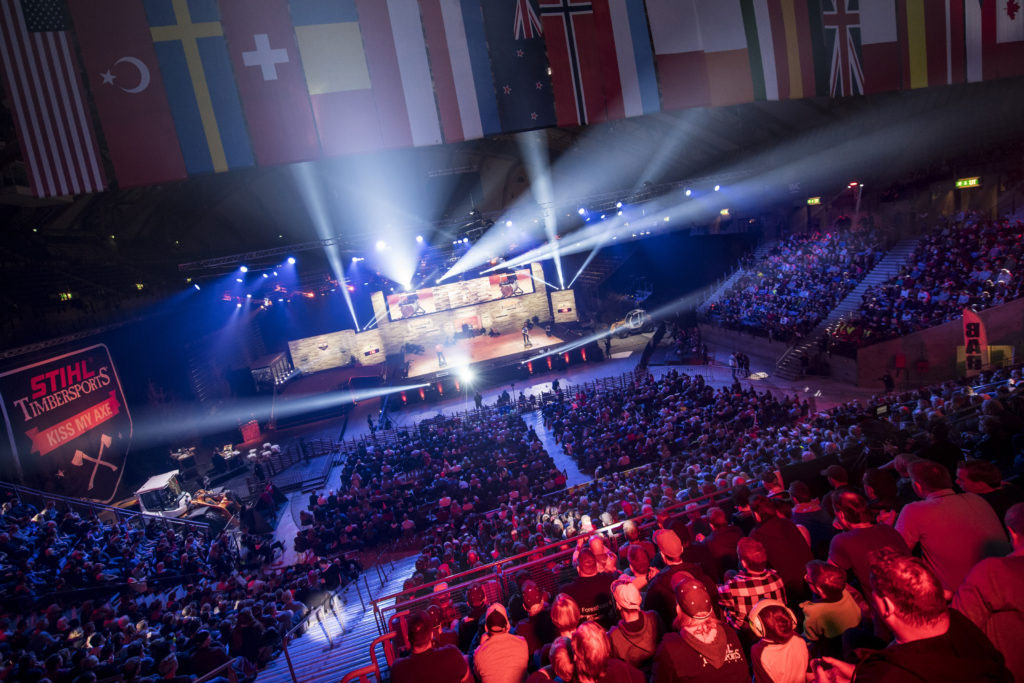